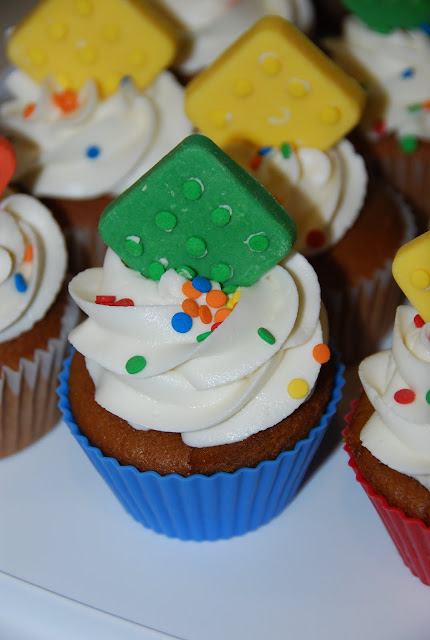 For Super Bear's 6th birthday party, he requested a Lego themed party. Of course, I happily obliged since I  LOVE Legos. I knew I needed to make something for his party at school too and decided cupcakes were easiest. Yes (gasp) I did use a cake mix for these cupcakes! I figured they are kindergartners and really don't care. One can't always be Julia Child. While those were cooling I made the Lego bricks for the toppers. I melted small batches of white candy melts

in the microwave according to the package directions. Then I used a little paste food coloring to color small batches of the melts into the primary colors like Legos. After I had a batch colored, I poured it into the Wilton bite sized brownie silicone pan

to form the small square shape. After these were cooled I piped a tiny dot of icing (I should have colored it as well, but I was tired by this time). On top of each dot of icing I put a single piece of primary colored candy confetti (I found this at Walmart) to form the nubs on each brick. 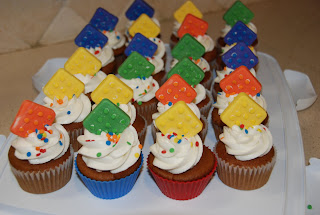 to create the swirled look. You could just squeeze it on with a snipped ziplock bag for a smoother look or use those cupcake icing bags in the grocery store. Then I sprinkled the icing with the primary colored confetti and stacked one candy Lego piece on the top of each swirl. 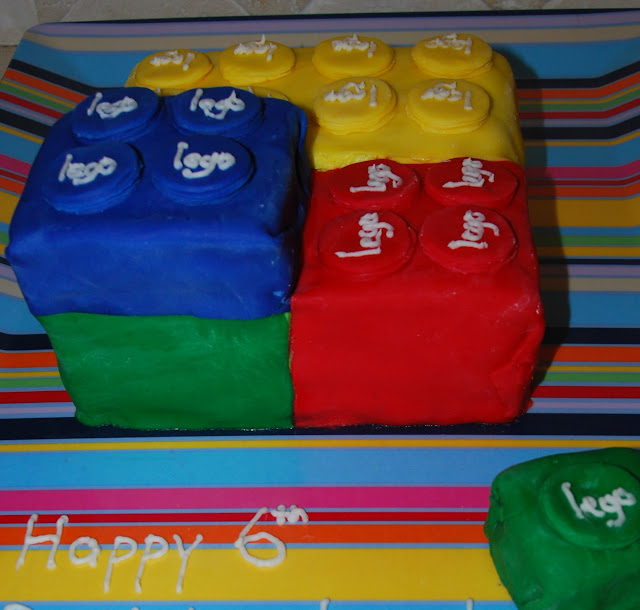 For the birthday party cake, I wanted to use buttercream icing, but I just couldn't get the sides to form squared corners. Silly me, I thought this would be an easy cake since it was just squares. I'm not a very patient person, so I probably could have done it, but I decided now would be the perfect time to learn about fondant. I had bought a packed of pre-colored primary fondant

just in case. I was waaay easier to work with than I imagined. I had the cake pieces already cut and frosted with buttercream, so I could just peel off the fondant if it tasted gross (which is what I've heard) when it came time to serve the cake. The buttercream also served as a "glue" for holding the fondant on. I opened each package of fondant and rolled it out using a little powdered sugar to keep it from sticking to my counter. Then I placed it over the piece of cake I was working with and formed the corners by cutting away portions and wrapping it around like a present. I used the left over fondant from each color to cut out the nubs. I had to stack a few circles together because I had rolled it pretty thin for the cake. I put a little sprinkle of water in between each circle to hold the stack together. After those were positioned on the cake, I piped "Lego" on the each nub. Again, if I wasn't so tired this night, I should have done each in the coordinating icing color. 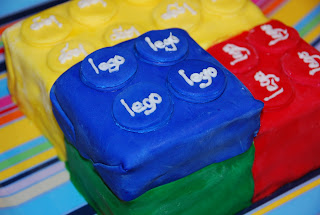 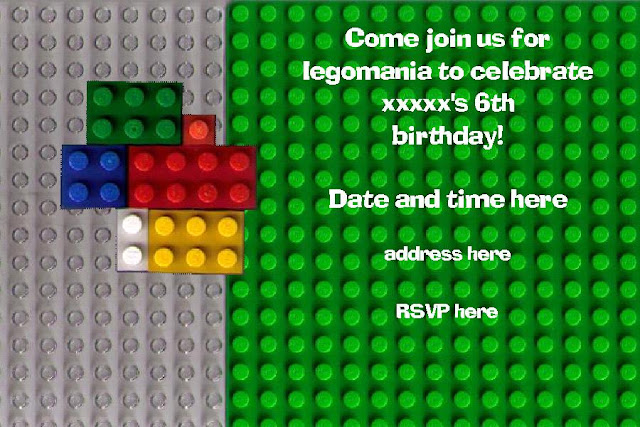 For the invite, I scanned some legos and a lego plates. These formed the background of the invitation and I wrote the details in a fun font.

When the kids arrived, we had some games to play. We gave each child a large foam rectangle to make two-dimensional Lego place mats, aka mosaics. They glued small foam pieces on the big foam sheet and then I brushed the whole thing with ModPodge to seal it and make it hand washable. We did this first, since it needed time to dry.  We also had a Lego spoon race where the kids carried the Lego's in spoons from the starting line to a bucket at the end. They learned quickly that speed was not good in this race and they needed steady hands. The girls did really well in this contest.
We had a giant jar set up with Legos inside the kids all tried to guess how many were in the jar and submitted their guesses throughout the party. I had bought a huge lot of mixed used Legos on EBay. They were really cheap and so I gave the winning guess the whole jar of Legos. We used the rest of the Lego lot for a building contest. We dumped the huge pile out on the floor and gave the kids 15 minutes to create anything they wanted. We had each child tell us about their model and then told them it was so fabulous they could keep it. You should have seen their reaction, it was priceless. I think the goody bags paled in comparison. It was a Lego-tastic birthday. 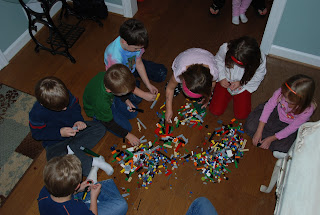