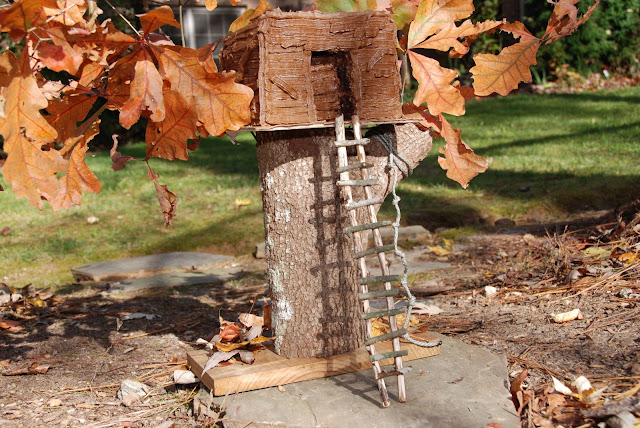 Do you know about Magic Tree house books? They are this wonderful series written by Mary Pope Osborne with titles like The Knight at Dawn, Pirates Past Noon,or Dogs in the Dead of Night. In essence, they are historical fiction for kids. You know learning WHILE they are having FUN??? That's my kind of homeschooling. I love that my oldest will pipe up some fact about Pompeii because he's read Vacation Under the Volcano Magic Tree House (MTH for those in the know) book. They even have these great companion guides (still written to kids) that teach actual history like the Pilgrims books that goes along with Thanksgiving on Thursday.
Can I share a secret? When I was in school I HATED history. I mean really, really did NOT like. I didn't understand why we learned things out of order (I'm kind of obsessive about chronological order). We learned all of these dates which meant nothing to me because I'm terrible with numbers. I remember one of my high school teachers, who looked like Abe Lincoln and smelled like coffee, would just drone on about these events that happened so long ago...really, who could care! I sure didn't. All of this indifference changed after I graduated from college and discovered historical fiction books. Here were actual life stories with incredible things happening to them. How real, how ordinary, yet extrordinary these events were. Imagine living in an underground bunker during the Nazi's reign in Poland (that's what I'm reading about now in Clara's War). Or how about the popular book Flags of Our Father's decribing the Marines' ordeal on Iwo Jima. Suddenly when reading books like these, the history hater in me became an ardent lover of the past. This kind of "ah ha" lightbulb- over- the- head moment, is one of the reasons I homeschool our kids. Depending on how, when and where things are taught affects how those lessons will be learned. When learning is fun - we love it. How many of you folks that are my age remember School House Rock? THAT was fun - that was a great way to learn things. Even today with it's completely dated hippy vibe my kids still love it.
I will get off my soapbox (fyi: they are called soapboxes because people giving speeches to crowds used to stand on soap shipping boxes to be heard better) and get to the birthday party if you promise to at least check out the MTH series. They appeal to kids from K-3 grade and adults like me!
Literally the day after Super Bear's 7th birthday party last year, he told me he wanted a MTH birthday party. The kid likes to get a jump start on planning - gee I wonder where he gets that trait from??  I loved the idea and kept my eyes open for things over the summer. I did find an amazing tree house play set from Hearthsong at a consignment sale. I figured it would make a fun play area for all of the kids since I still have younger ones. Beyond that I discovered the actual MTH website which contains TONS of fun ideas and information. There are games for the kids and they can earn passport stamps when they take quizzes about the books they have read. I printed off a few things for the goodie bags and got the logo for our invitation off their site. 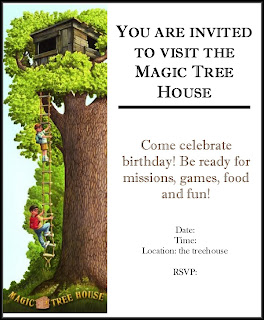 When I first began planning the party I wasn't sure what theme direction to take it in. I mean, you could do a pirate party, an Egyptian party, a polar party. There are tons of directions you could take this them depending on what you kid loves. We decided to have different adventures (called missions on the books) in different book themes. 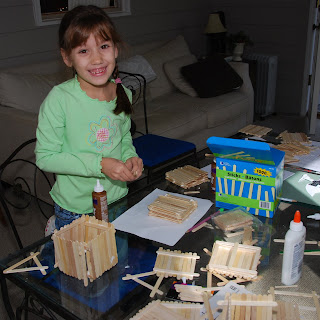 We started off creating our tree houses with popsicle sticks so the glue would dry before they took them home. I thought I'd let the kids figure out what they wanted to build, but looking back I should have done some examples because they struggled a little with this project. They couldn't figure out how to join the walls together. They still enjoyed their projects. Be sure to do this on a glass table or put down some butcher paper because they WILL get glue everywhere. 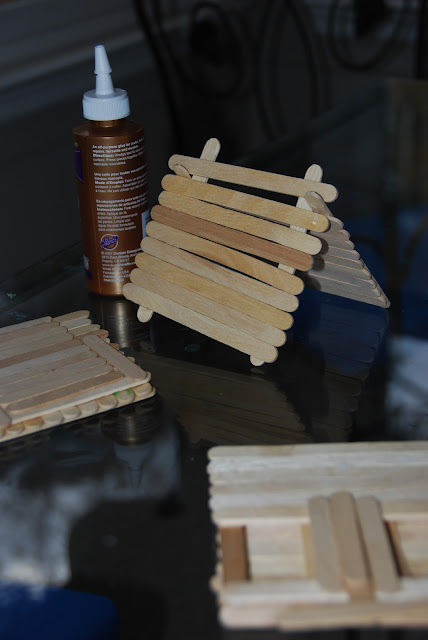 Then we travelled to ancient Egypt and talked about how and where the wealthy dead people were mummified. I divided the kids into two teams and gave them three rolls of toilet paper and told them they had to create a mummy. They had to decided who was going to be the mummy and the rest of the team had to wrap them head to toe. It required patience and team work. One team quickly learned you couldn't rush it or the paper would rip. Very fun! 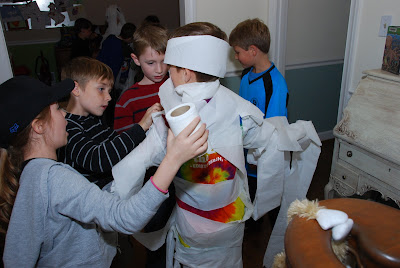 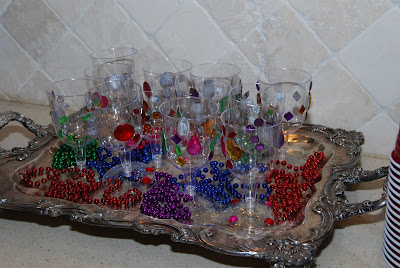 Next they needed to get the wiggles out, so I sent them outside for Olympic foot races. Then we awarded them all with gold medals.

After all of that running, they were "starving" so we headed to King Arthur's court and had a medieval feast. They each received a goblet decorated with gems and jeweled necklaces (which they got to keep). Note to self - use NON washable glue when creating the goblets next time! 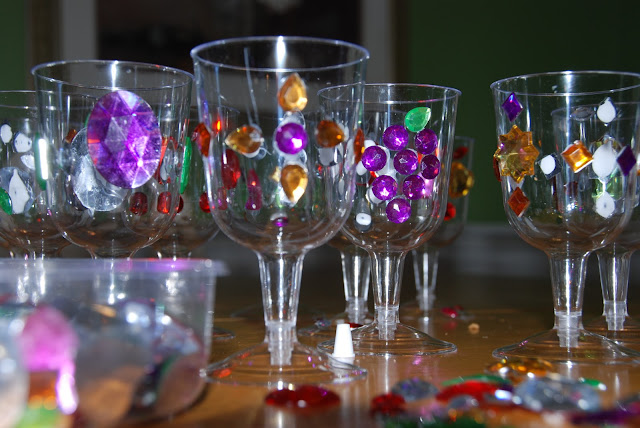 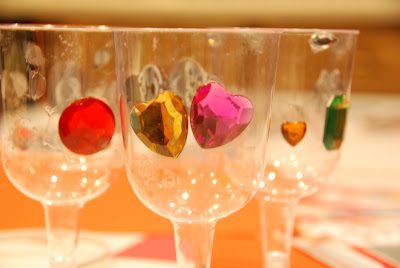 We talked about kings and queens liking jewels and huge banquets. We talked about Arthur's round table and the knights. The menu included a whole roasted chicken with potatoes and whole carrots, a platter of sausage, cheese and olives, braunschwiger, salami, bologna, a loaf of crusty bread, whole pears poached in a spiced syrup with pomegranate seeds, and a honey punch. There were many items our guests had not tried, but I was proud of them, they each tried something new. In fact, many of them said how much they liked the pomegranates. They loved the honey punch so much we ran out. It's great fun for me to introduce kids to new things - new sites, sounds, tastes, etc. I see that same joy on my kids' faces as they introduce their friends to new things. 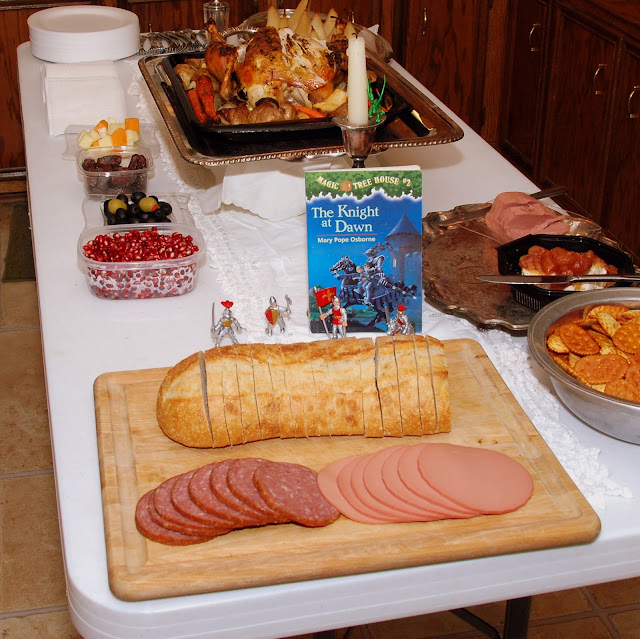 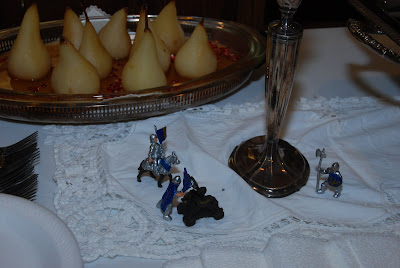 I should mention each room in the main level of our house was decorated with a theme from a MTH book. It was all stuff we had around the house. There were dinosaurs in the dining room, knights in the kitchen, pirates on the porch, and buffalo in the bathroom. Entering each room, the kids squealed with delight over the theme. My kids were so excited to participate in decorating for the party, that setting everything up was a breeze. 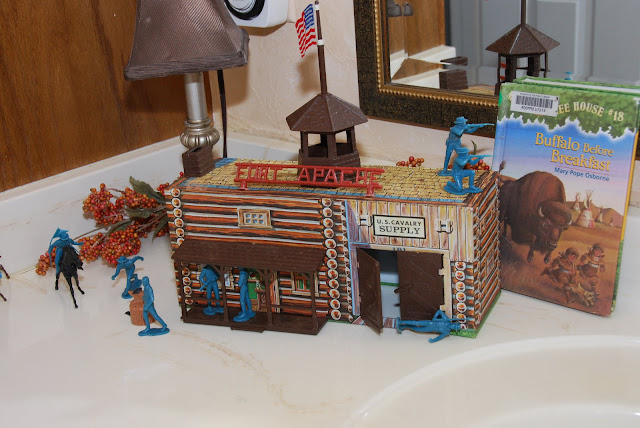 The bathroom decorations were from an old set my husband had from childhood called Fort Apache. It's still up and the kids don't want me to put it away! 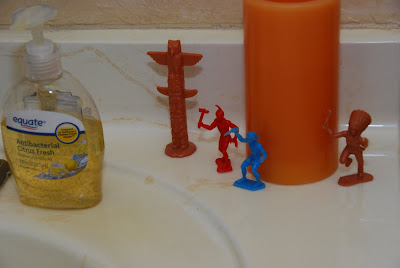 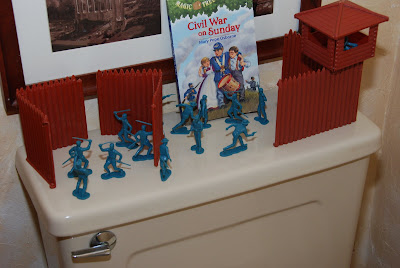 The pirates on the porch were a great buy from Craigslist. Thank you kind mom who knew exactly what I needed! All of the stuff got played with as the partygoers went from room to room with their activities. 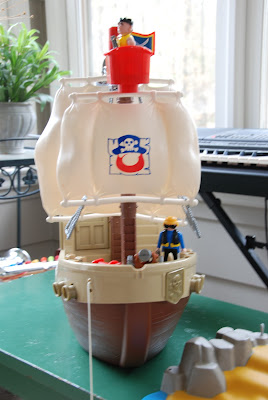 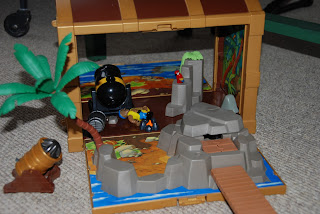 After lunch we sent them on a pirate's treasure hunt complete with a genuine treasure map drawn by my wonderful husband. The kids went all over the yard looking for the treasure. Turns out it was in the family room right by the presents in a huge old steamer trunk..definitely a treasure chest! 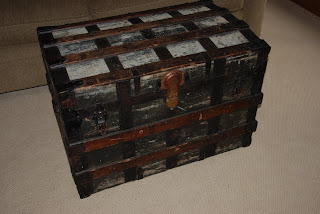 We saved the cake for last. Most of the kids (and parents) didn't really know it was the birthday cake when they saw it still on the kitchen table. They said it looked like another decoration and thought it was a toy! That tickled me to no end! It's exactly the effect I was going for - a real tree house! I'm not sure the birthday boy really wanted to eat it. I think he was hoping to leave it up for a few days. But alas, all good things must come to an end. And it was worth the wait - it was a delicious Hot Chocolate flavor. A combo that I made up and I'll have to share. 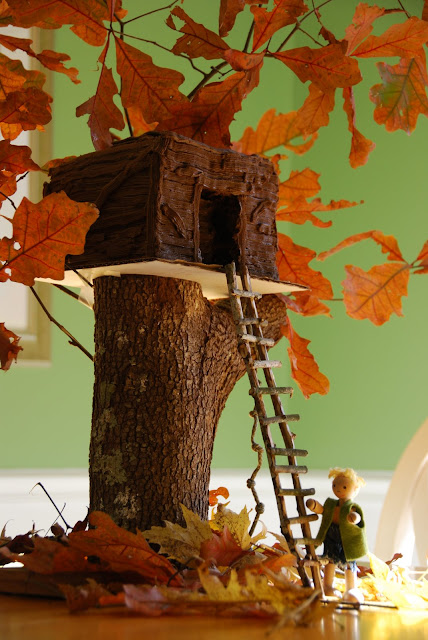 This was one of the easiest cakes I've ever made. It's just a square with a little bit of cake carved out for a front door. Then I used piping tip #47all over in chocolate icing to create the planking. The tip has a jagged flat edge, but you could use any flat tip. I was going for a a rough, rustic edge to create boards. I made straight lines and then a couple of slanted lines to mimic boards just nailed up in random places.

My amazing MacGuyver husband created the stick ladder, rope and tree trunk stand. I couldn't believe how well it all turned out, especially with the real leaves. I got the leaf idea from this blog. It was the only other treehouse cake I could find. I'm much better with actual objects than creating artwork on a cake. I am NOT artistic, I can't even draw a stick figure. However this cake took no artistic ability - in fact, the messier it was, the better it looked!

I cannot recommend this party theme enough. So many ways to make it work for you and so many ways to make your birthday boy/ girl thrilled. I was actually shocked to hear my 8 year old declare, "that was the best birthday party ever, maybe we'll have Magic Tree House again next year!!" 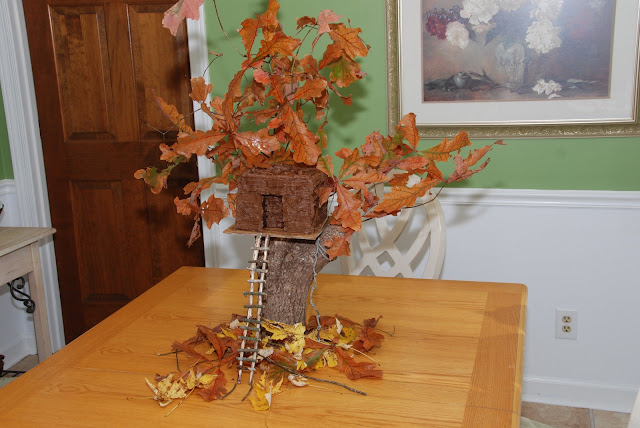