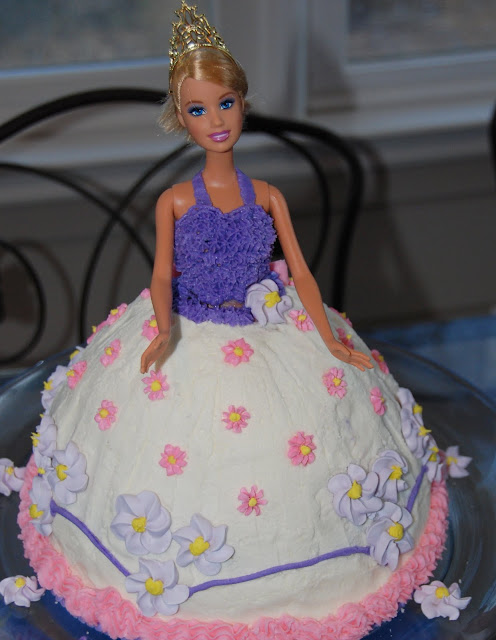 No matter what the amount of masculine things lying around our house, our Banana Girl is a princess through and through. Her favorite color has always been pink, despite my best efforts to encourage purple. She loves to dress up and play princess. In fact, we have dresses from three generations: stuff from my Grandma, my Mom, and me. Seeing her wear that prom dress from the 80's is hilarious.
When our little royal decided she wanted a princess party for her 4th I knew right away it would involve a doll cake. I know the idea of eating a skirt is well...absurd, but I love doll cakes. They make every little girl smile.
Banana Girl and I decided on a pink and purple (I think she agreed on purple to make me happy) color scheme for the party and we were off. I purchased inexpensive invites from vistaprint with a cute birthday princess on them. Then I added some dimension and texture to the flat invite with a balloon cut from scrapbook paper and stamped with the number four. I attached the balloon with a pop dot

to raise it off the page. All the invites were addressed to "Princess _____" and written in pink pen. The postal carrier doesn't care as long as the address is right. 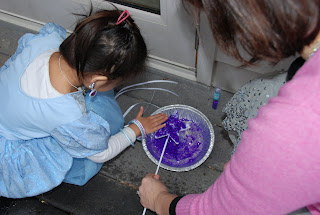 Since this was party for 4 year olds I didn't go to crazy on the activities. We set up a table with princess coloring pages, stickers, glitter and markers for their first activity. As they colored, I took them one by one outside and helped them make glitter wands. These were just foam wands

purchased at a craft store. I used spray adhesive

on the star part and the girls sprinkle all the purple glitter they wanted on the wands. I did this outside because the adhesive is smelly. We used a disposable pie pan to catch the overflow. We also had a local art expert, aka Aunt Nadia, on hand to do face painting. Each girl chose a design and they were finished off with more glitter! A princess needs lots of glitter. When all of this glitterizing was done, we let the girls play in the dress up and jewelry bins. They all came in princess costumes (per the invite suggestion) but we wanted to give them a chance to really glam it up. They piled on the jewelry and then lined up for a fashion show, which involved a lot of twirling and waving. We took each girl's photo under a princess banner that Banana and I had colored days before, and included the photos in their thank you notes.
The menu was chosen by the birthday girl. She picked mini smoked sausages, cream cheese and cucumber tea sandwiches cut into flowers (I actually had to breakdown and buy white bread!), pink princess jello, hummus and crackers and a sparkling punch (just Juicy Juice and ginger ale).  After we served lunch the girls were ready for "PRINCESS CAKE"!

Making this cake was not as hard as I thought it might be. In fact it was easier than the Lego cake a couple of months ago. You need a doll cake pan, but I know some people have used a glass bowl. I happen to have inherited my doll cake pan, but you can pick them up pretty easily on ebay. This makes the perfect shape. I looked at the doll picks

you are supposed to use but I didn't like their faces, so we picked up a Barbie on sale one day. Only after I finished baking the cake did I realize Barbie (in her *realistic* proportions) has legs up to there if you know what I mean! She was way taller than my cake, so I baked another cake, this time an 8" round. Even with the round cake under the doll skirt cake, Barbie was still taller. Barbie had to shrink somehow, because I was not baking anymore cake! It was then that I did what every little boy has done or tried to do, I ripped Barbie's legs off. Apparently Mattel has gotten wise to the fact that brothers just might do this very thing and they now make Barbies so their legs pop off and just pop right back on, hooray!
With her legs off, I wrapped plastic wrap around her lower half so icing wouldn't get into her leg holes. I cut a hole in the top of my cake and she fit right in there, snug as a bug in a rug. This is what my husband came home to that night. He had a bunch of snarky comments to share about the princess, but none of them will be shared here. 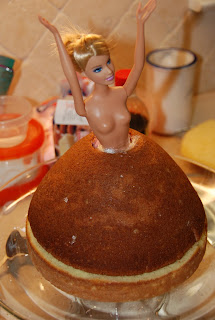 After the princess had a chance to cool off, 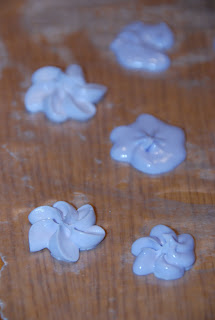 I frosted her gown with white icing and started playing the embellishment - icing flowers. While the cake was baking the day before, I whipped up some royal icing and piped out the flowers. Doing this a day ahead ensured my flowers would be nice and dry and easy to handle. You've seen royal icing decorations in the grocery store: packaged up as numbers, letters, characters all made out of hard icing that lasts forever. That's royal icing and it is wonderful if you know what you are doing. When I first started piping my flowers were a little melted looking (see the ones in the top of the photo). I realized quickly my typical lack of patience had cost me; I hadn't whipped the icing enough, You really have to let the mixer work for 7-11 minutes. I emptied my piping bag, rewhipped and started all over. This time the flowers were perfect (see the one in the photo bottom left). They air dried overnight and were ready for me the next day. 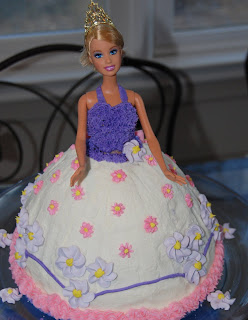 After I mixed up my colored icing, I piped her bodice. Banana Girl insisted she have straps on her gown, so I piped those too. I added the trim on the bottom and then just peeled the royal icing flowers off the wax paper and placed them all over the cake. I had enough flowers to place extra ones around the cake on the platter. Right before the party I put the smaller pink flowers in her hair and one in her hand. I left Barbie outside on our sun porch, which was freezing so no small children would be tempted to touch. Aggh, the best laid plans...the birthday girl wanted to show her little brother her cake. He immediately pulled a flower off and started to push Barbie's body. Blood curdling screams of, "Moommmm!" followed and I came running in time to stop any real damage. Notice the princess has a little bare spot at her tummy? This was not to give her room for her navel ring, it was due to the wobbling she got from the 23 month old. I have learned, keep some of your extra colored icing until the cake is served, just in case. I filled in her Brittany belly and replaced the eaten flower with another and she looked flawless, until the rubber band in her hair popped - twice! I had to try and recreate the perfect updo I had done BEFORE she got in the cake without messing up her icing bodice. That was the only part of this cake that was a pain. I recommend getting a doll with an updo already done-did. 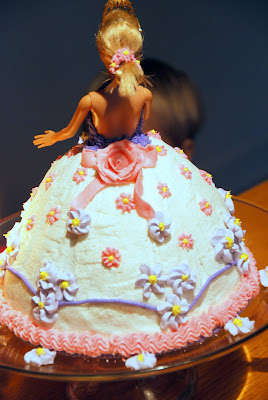 This is the back of the cake. There is the infamous Wilton Rose that I thought I'd never make. Notice her hair sticking out of the rubber band - I was just glad it finally stayed put. 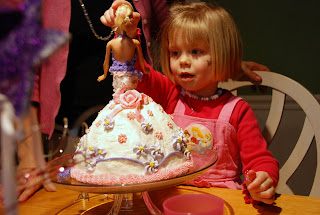 The birthday girl taking the dismembered Barbie out of the cake. You can see the plastic wrap I put around her to keep the frosting out of her leg holes. 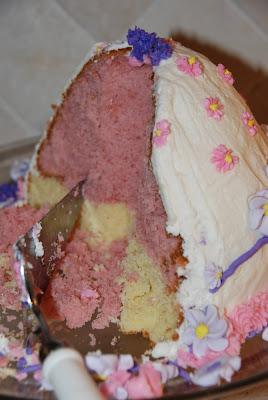 Banana Girl wanted the inside of the cake to be pink, but wanted vanilla (not strawberry) cake. A few drops of food coloring into the batter before baking and voila, you have pink cake. Here you can see the doll cake pan on top of the 8" round (the yellow cake) that I wasn't just going to throw away, so I used it even though I did not need it.

This was a fun, very girly party that the little guests thoroughly enjoyed. The Birthday Girl was thrilled with all of it, but it warmed my heart when she told me her favorite part was the Princess Cake. I love my little princess.
at 10:47 PM