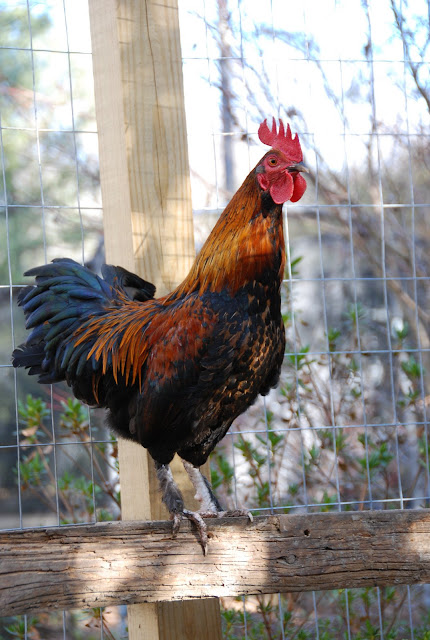 You may have heard the song, "A Boy Named Sue". (My family loves Johnny Cash.) We have a version of that song around our house. It's a "Rooster Named Autumn". So how does one end up with a rooster aka boy chicken who has a girl name like Autumn?
Once upon a time, we got some cute baby chicks at a chicken giveaway promotion and raised them into productive egg laying hens. Well, all except one. Turns out one of them was a boy, a rooster by the name of Freedom. We didn't know she was a he when we got him (her?). How could this have happened? We were only supposed to taking home girls, not boy chicks.

It was after Freedom began his annoying crowing I decided to learn about "sexing chicks" aka determining their sex, usually done when they are a day old. Apparently sexing is NOT an exact science. R. Keith Bramwell, Extension Poultry Specialist for the University of Arkansas's Avian Advice has this to say about it...
Vent sexing baby chicks is a method popularized in the 1930s by a Japanese professor, Kiyoshi Masui. Individuals well trained at chick sexing schools can consistently and easily attain greater than 95% accuracy. This method involves holding the day old chick upside down in one hand and while visually examining the vent area for the presence or absence of a rudimentary male sex organ.
This method sounds much easier than it really is. After being taught the basics of this technique from non-professionals, most people would be doing well to obtain 60-70% accuracy at best. However, if interested, additional written information on this technique can be obtained from the Center of Excellence for Poultry Science at the University of Arkansas. Most commercial hatcheries that offer chicks for sale as either pullets or cockerels utilize this method.


The "vent" Mr. Bramwell is talking about is the hole where the eggs come out. 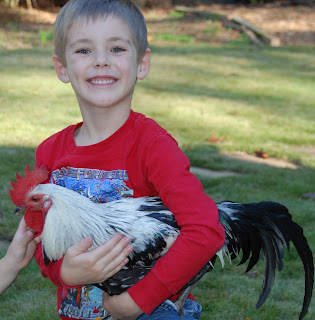 Since we took home six babies that day, it's no surprise we ended up with Freedom the Rooster. I mean, 60-95% accuracy. That's about as accurate as people who hold a string over a woman's pregnant belly and see how it swings to determine the baby's gender!

You are no doubt wondering what does Freedom have to do with the "Rooster Named Autumn"? Freedom, in the photo with Super Bear crowed ALL THE TIME!! Seriously, roosters don't just crow in the morning, they crow all day long. I did not sign up for this, in fact I specifically remember saying, "no roosters" when we started this adventure. I was so annoyed with the crowing and his incessant preening around like some kind of King, I wanted to grant Freedom his freedom. But it wasn't until that crazy chicken chased our sweet Banana Girl around the yard trying to peck her (she finally escaped onto the trampoline) that MacGyver finally relented and said we could get rid of him. He was beautiful to look at, but Freedom had to go.
One day I walked out to check for eggs (I couldn't send the kids to do it due to the attack chicken in there) and Freedom was gone. He had been replaced with a sweet brownish-gold chicken. We had peace and quiet in the henhouse again and I was thrilled. We named our new chicken Autumn since we got her in the fall and due to her beautiful colors. That should have been my first clue. Like many other birds, the males get the pretty colors. After four weeks of bliss out back, Autumn started clearing her throat. It sounded like a cough or wheeze. I knew THAT sound! This was no hen, Autumn had to be a rooster. I was the first one to hear her but because she didn't do it again for several days, no one believed me. After those couple of days, Autumn got up the nerve to try the racket again...and again and again. Oh how that rooster crows!
This is how we ended up giving a very girly name to a rooster. I keep hinting that Autumn needs to find a new home so I can get some sleep. I can't believe we traded a rooster for a rooster, what dopes. I hope the next replacement is not at all pretty or colorful. Give me a plain old boring brown or white chicken. She and I will get along just fine.
at 4:12 PM