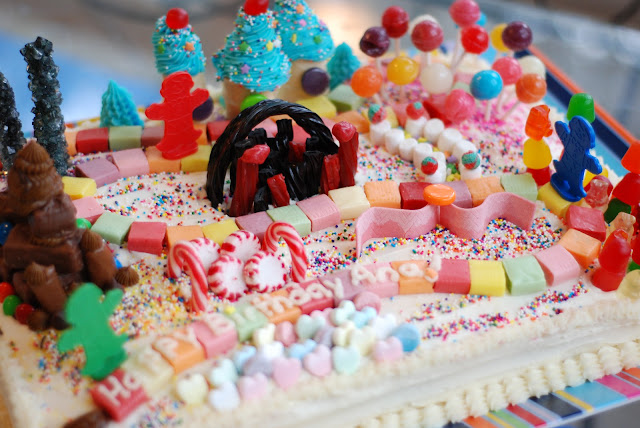 WARNING - this post has LOTS of sugar and photos! You may need a toothbrush or a cup of coffee just to read it!
Oh how I adore Candy Land!! I loved playing it as a kid (actually I love playing it still). It was one of the first games I got for my kids. I mean it says right on the box, "A Child's First Game". I love that it doesn't involve reading, only color recognition. A while back in Taste of Home on the back cover I had seen a Candy Land birthday cake that I knew I HAD to make. I just had to convince one of my kids to let me. Finally this year, Banana Girl was bouncing from idea to idea, not really committed to anything and I said, "what about Candy Land?" She was not convinced saying, "Mommy, Candy Land is for three year olds!" But then I showed her the cake idea and she was on board. What kid wouldn't love a cake full of CANDY??
The prep work for this party was pretty easy since I started right after Christmas. I picked up a bunch of Christmas clearance items to fill the goody bags. You know, the candy and cupcake makeup/ bath items? A very inexpensive way to go and I knew I didn't want to send them home with more candy. I also tucked a toothbrush in the goody bag as a thanks to the parents. 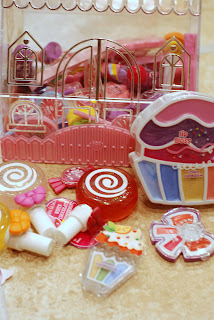 We used one of Banana Girl's Christmas presents for a craft. It was a little American Girl kit that made a bunch of button rings. I figured they looked enough like candy, that it would work. 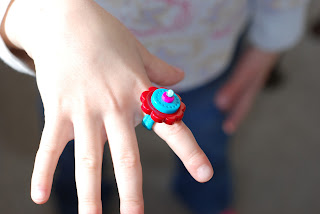 I picked up some fluffy socks that are always around at Christmas time. These I got from the Target dollar spot. I saw this cute idea on Pinterest and made them as favors for the girls...sock cupcakes. 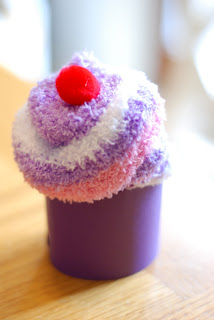 We decorated around the house with all of our play kitchen candies, sweets and desserts like ice cream, cookies, cupcakes, etc. Of course, we also used the Candy Land game box, board and pieces to decorate. 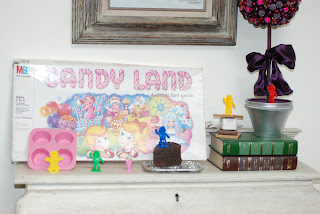 We also made these adorable giant lollipops for the walkway. They are a white paper plate wrapped in colored cellophane and tied with a bow (or you could use colored paper plates and clear cello). My husband set them on sticks for the party, but the wind proved too much. The next choice was this beautiful piece of rusted rebar - which definitely help them. You could go all out and put them up with white pvc or slide a white painted wrapping paper tube over the rebar. 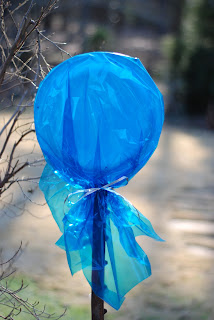 I also made giant candies to hang around the house. 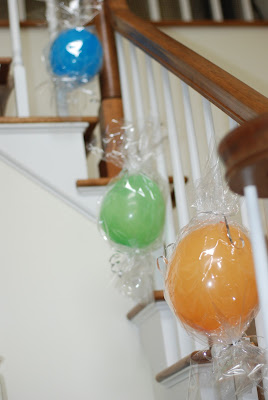 So easy, you blow up a balloon and wrap it with clear cellophane, then tie the ends with ribbon. 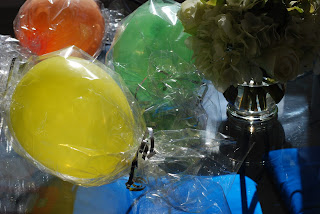 For our fun and entertainment, the girls made the button rings. They also crafted beaded candy canes. I gave them green, red and white tri-shaped beads and a length of pipe cleaner. They strung the beads however they liked and I just bent up the ends to keep the beads on. It's an easy Christmas ornament and went perfectly with the Mr. Mint part of Candy Land. 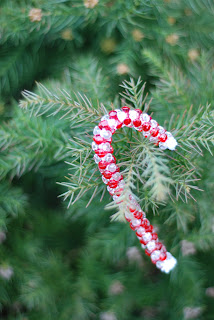 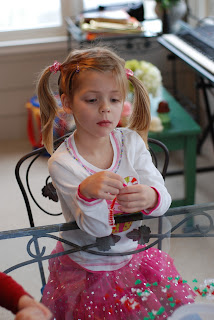 The girls also made felt cupcakes. I saw this printable and set to cutting the pieces out. I made icing and cupcakes in a couple of "flavors". Then I cut put the liners and decorations. 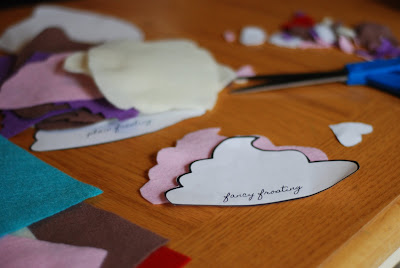 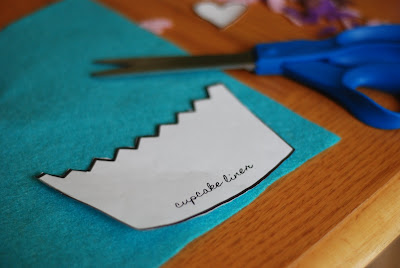 The girls had a great time creating their custom cupcake. I will say, don't use white glue as it won't work on the felt. We ended up using Aleene's Tacky Glue, which worked beautifully. I would also recommend doing this activity first, so the glue has time to dry. 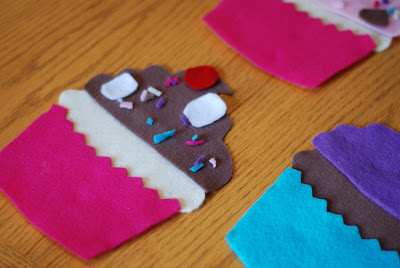 We played a version of a "cake walk". I set squares of colored paper on the floor and had them walk around to the tunes of I'm A Gummy Bear, and I Want Candy, and such. Then we stopped the music and drew a card from the Candy Land deck, whoever was standing on the right color, got to pick out a piece of candy from a huge bowl. We played until everyone won multiple times.
We also played licorice limbo, which was a crack up. Those little girls are LIMBER! Of course, everyone got a giant string of licorice. 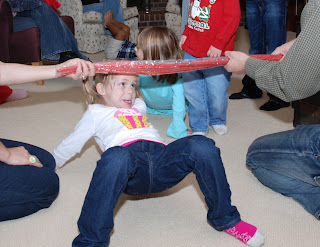 The whole menu was determined by the Birthday Girl. She REALLY wanted a rainbow of fruit, since that is her current "favorite food in the world". I didn't want to mess with skewers like I had seen, so I just laid it all out on a platter with marshmallows on the ends for clouds. We also had mini hot dogs wrapped in croissants (like little gems). A rainbow of colored peppers (another of Banana Girl's current obsessions) with dip. Crackers and egg salad. 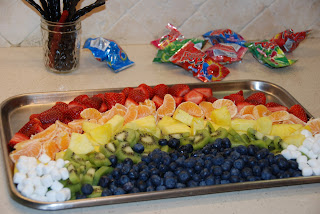 When the girls saw the cake, their eyes were as big as moon pies. They couldn't wait to eat it. The cake looked like a sugar fantasy come to life. They all wanted " a huge piece with lots of candy". Luckily with this cake it wasn't hard to satisfy their requests. I warned parents in the invite, their kids were going to come back with a sugar high and they needed to eat a good breakfast! 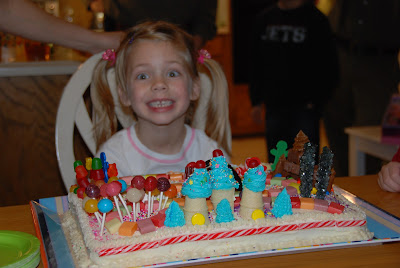 You can make this cake really anyway you like. I thought about it back in October and set aside some Halloween candy. I did have to buy a big bag of Starburst. I used these for the pathway. The only color I couldn't find was blue, I guess they just don't make blue starburst. 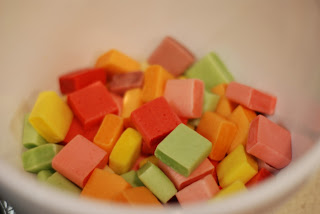 I added the real game pieces (after a good washing) for authenticity. You can see the Chocolate House which Grandma now lives in. She used to be Grandma Nut with peanut brittle and there was a molasses swap with Goopy - no longer. I guess kids today don't eat peanut brittle and molasses, well all except my kids :) I made the chocolate with mini Snickers, tiny Tootsie Rolls and chocolate icing. There is a small peppermint area (Mr. Mint has gone the way of Goopy) and some candy hearts in front. 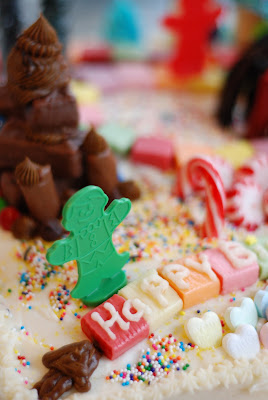 The gumdrop forest was created using toothpicks to stack them high. 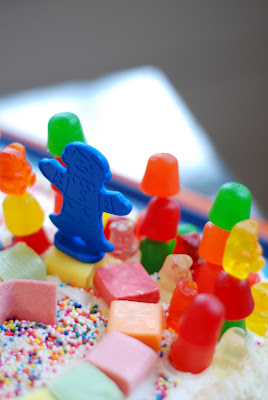 Lord Licorice's castle was very pointy and dark looking. Definitely not where you want to land! 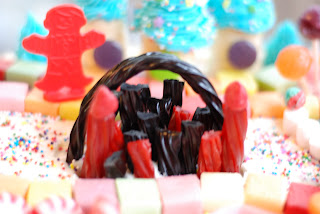 The lollipop woods were easy, just unwrap and stick them in. The more random and tilted they were, the better they looked. 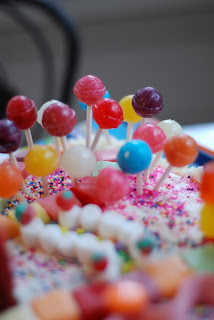 I had to make a bridge for the shortcut. I used star sprinkles and mini marshmallows, crowned with Trix cereal. There is also an ode to the Birthday Girl. She LOVES chewing gum and has just figured out how to blow bubbles, so I put a couple of sticks on there for her. 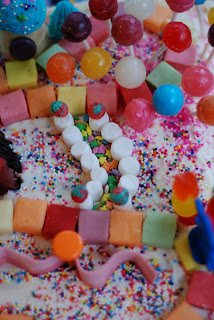 King Kandy's Castle was made from small ice cream cones that I already had, towers of icing and topped with sprinkles and a red gumdrop. 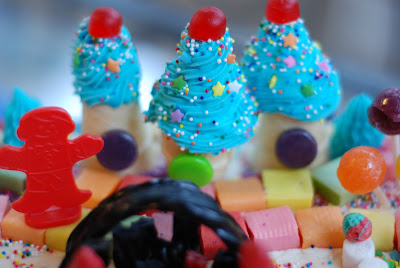 I added sprinkles all over the whole cake at the Birthday Girl's request. I think it made the cake VERY busy looking, but she adored it and I have to remind myself, it is HER cake! All and all this cake didn't require any special skills (I did pipe a border of stars, but you could easier do more candy). It just took some planning because I didn't want to buy all of this candy. Saving a little here and there as the kids got it from Halloween, Awana and the bank, saved me from spending too much.
The party was a roaring success and another confirmation of why I love creating special birthday parties for my kids. There is no place like home!! 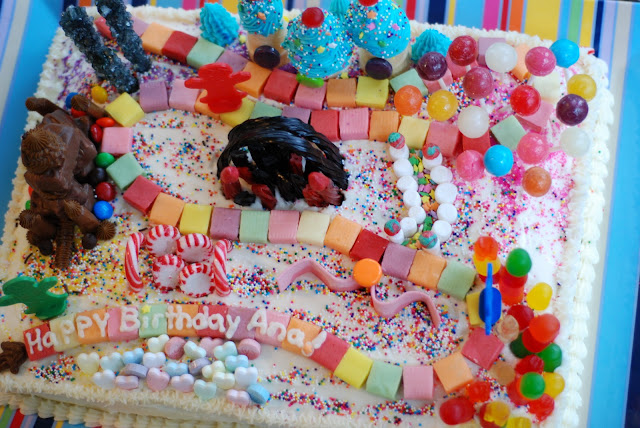