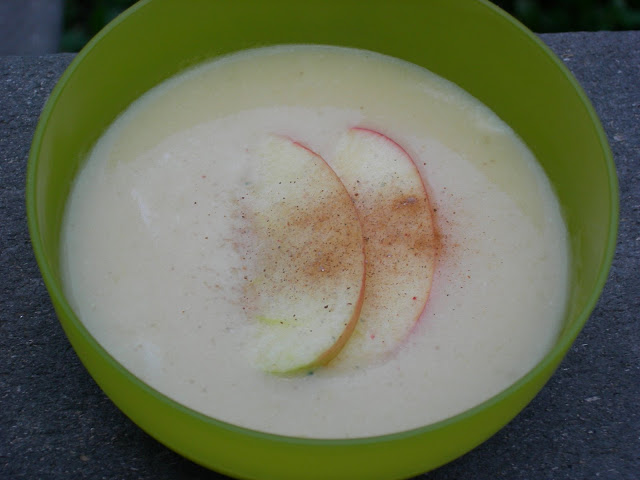 Yea!!! Apples are here. We took the kids apple picking up in Ellijay (Georgia's apple capital) and had another wonderful time. We go to R & A Orchards owned by Richard and Ann, who still drive the tractor and hand out the picking bags. They are a caring couple who's kids and grandkids can be found out in the orchard working with them. I love seeing a family business succeed, so I'm happy to support them.
Their apples are priced very reasonably and taste waaay better than store bought. We picked two pecks and bought another peck that was filled with seconds (smaller apples I used for apple sauce, apple butter, and apple muffins). Can you tell we REALLY like apples around our house? I had trouble getting the kids to let me cook with them because they just wanted to eat them straight out. My husband loves them best like this.

Apple Pie Soup is a recipe worth the small effort. It's delicious! It comes from a combination of a recipe I learned at the Whole Foods Cooking School, where I volunteer, and a recipe out of the Palmetto Palate Cookbook. Both of those recipes serve this as a chilled soup but I really like it warm. When it's warm it reminds me of apple pie...delicious! Serve it however you like, no matter, you and your kids are going to love this one. 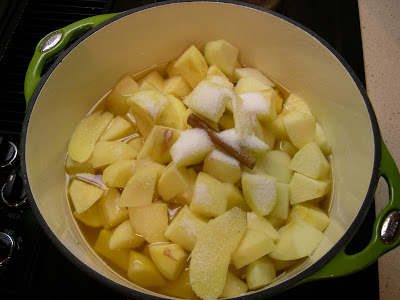 12 apples, peeled and sliced or chopped
3 c apple juice or cider
3/4 c sugar
1 cinnamon stick (or you can use 1 tbsp ground cinnamon)
1 tsp ground ginger
1 tsp vanilla
2 c half and half

Cook apples with juice, sugar, cinnamon and ginger in pot. Bring it to a boil with the lid on, then turn down the heat and remove the lid, let it simmer for 20 minutes. Stir occasionally and break up the apples as they get mushy. Take out the cinnamon stick if you used it and add the vanilla extract. Puree the soup in a blender or with an immersion blender (my personal favorite kitchen tool). Where you go from here is your choice. Put back in your pot or chill in fridge. If you want to serve this warm, you add the half and half slowly bringing the soup back up to a warm temperature. If cold wait until the base is well chilled and then when you are ready to serve, add the half and half and mix well. Serve in bowls with a few slices of apple and some cinnamon sprinkled over the top as a garnish. 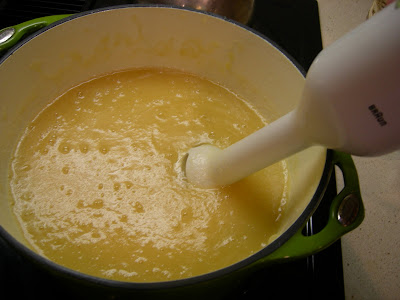 I finally broke down and got an apple peeler this year and now all I'm thinking is, "what took me so long"? These things are great! It makes fast work of getting an apple peeled, cored and sliced and the kids can even do it with me.