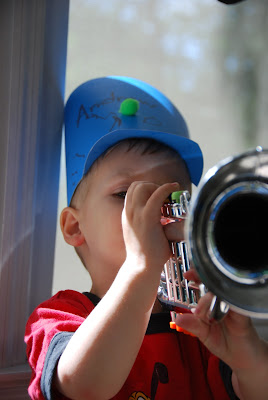 Where do they get their ideas? I've often wondered where my kids come up with some of their crazy ideas. I asked my soon-to-be three year old what kind of birthday party he wanted. His initial request was a "motorcycle party", but I nixed that one pretty quickly. We seriously don't need anymore motorized vehicles in our house! I also don't want to encourage the same kid who's been known to walk off with the keys and even once attempted to put them in the ignition! He's a little unpredictable. So I guess I shouldn't have been surprised when he next requested a "marching band birthday party". Ummm, okay, where do I go with this one? Course the more I thought about it, the more I figured we could really pull this off. It would be loud, it would be obnoxious, but it would be a ton of fun. I know my Sausage Boy is OBSESSED with musical instruments, especially trumpets, so why not cater to that obsession (at least it wouldn't bring more trucks into the house like last year's Truck Stop party). 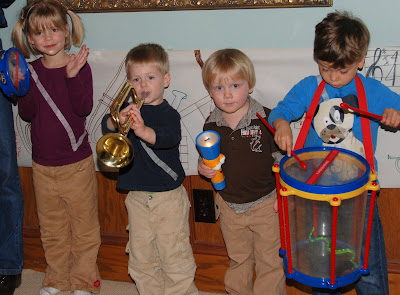 The first order of business was to get their uniforms made. We used masking tape to tape a diagonal stripe on each kids' shirt for their uniform as they arrived. We had a craft set up right away to keep their interest. Each got to decorate a flat piece of posterboard with markers and pom poms which we then turned into marching band hats by stapling them into a cone and taping on a brim (a small wedge shaped cut out of the posterboard). The kids loved these outrageously tall hats and immediately started marching around. We had all of our musical instruments around the house for their marching pleasure. We also had beans and random empty containers to make shakers which they loved. I had a stash of paper plates and jingle bells to make tambourines, but the boys quickly lost interest in the crafts part and were ready for snack. 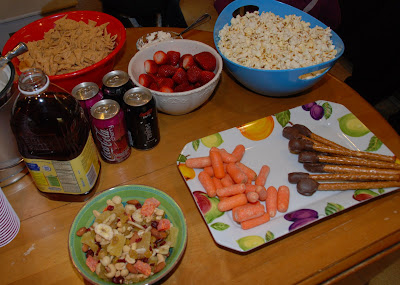 Food fit for a marching band: snacks and freshly popped pop corn from the Whirley pop 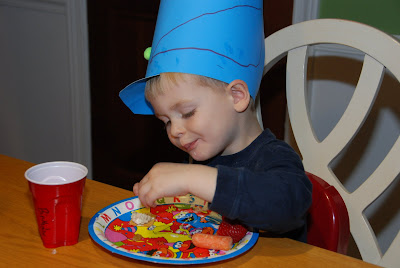 A marching band party calls for a cool marching cake. I decided a drum would be the easiest cake to make. I layered three 8" circle pans to create an extra tall cake. Then I frosted it in bright colors of blue, green and white. I added fruity Twizzlers around the sides for the supports of the drum. It was a colorful take on the traditional drum, perfect for a kid's party. 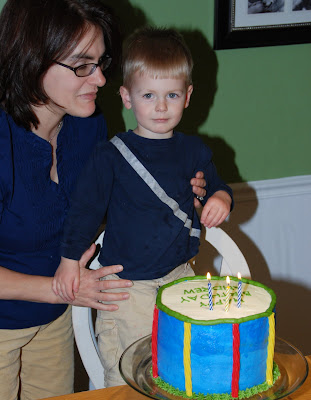 It was LOUD, it was wild, but it was great fun. I'm actually a little sad birthday season is over around our house until fall.