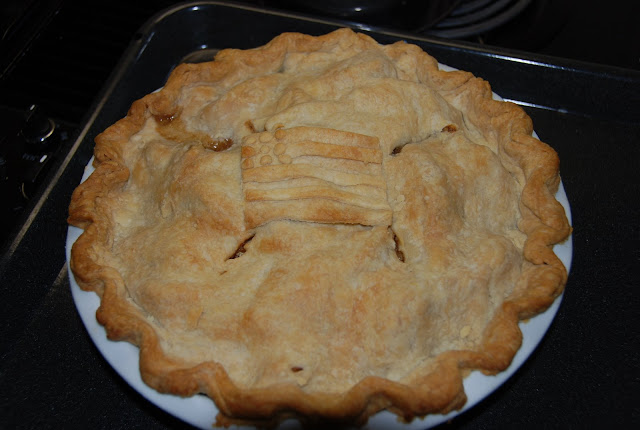 We had some friends over for 4th of July for a cookout with Bambi burgers (okay I know it's sounds a little harsh, but they are yummy and better for you than beef), hotdogs, and apple pie for dessert. What could be more American?...putting the flag on the top of the pie. So easy and adorable. Cut out a rectangle of leftover pie dough and then a couple of small strips for the stripes and roll a couple of tiny balls for the stars.
I don't really have a recipe for my apple pie as I have been baking it since Jr High Youth Group.  We used to go out to an orchard, pick the apples, spend the night at church and then bake pies the whole next day. They sold incredibly quickly at church that Sunday and they were delicious. You really just need apples, butter, spices like cinnamon, ginger, nutmeg, allspice, maybe anise seed or cloves if you are feeling wild and sugar (I use a mix of brown and white). I can almost smell it baking now!


Combine apples, spices, sugar and flour in a large bowl. Toss to coat the apples. Plop them into the bottom pie shell. I like to pile them up into a huge mound because I think the best part of the pie is the apples. Put the butter pats over the top of the apples, spread out. Carefully lay the top crust out over the apples and press the edges of the two pie crusts together to form a seal. You can make this pretty and flute it like I did above by pressing your first three fingers together on opposite sides of the crust. Kinda like you are giving the pie crust a good pinch. Moving around you do this on the whole edge. If you made your crust, you might have leftover that you can create into a cute topper like I did with the flag.  No matter what, be sure to vent your pie so it stays crispy. Cut small slits or holes into the top crust before you bake it. Bake at 400 degrees for 45mins - 1 hour depending on how many apples you used. Be sure to put a cookie pan with edges under the pie in case it drips out. Let cool and then serve otherwise it will be a soupy mess.
at 11:13 AM