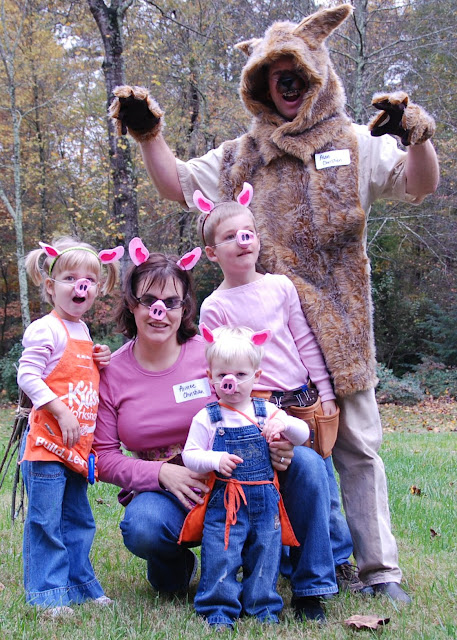 Each year, we coordinate our Halloween costume as a family.  This year we went as the Three Little Pigs. My good sport of a husband went as the big bad wolf and I was the "mommy pig". I never knew there was a mommy pig in the story until we got several versions of the book from the library and the kids pointed out the mommy. She, unfortunately is the one who sends them off to their almost demise (guess she was sick of sharing the house with her grown children).

Each kid got to carry around their building materials. The brick is a butter box covered in red paper. I cut the ears out of two colors of felt (light and dark pink) and hot glued to them to headbands. I was going to buy pig noses from a party store, but they are really ugly and scary and way too big for the kids faces. Instead I made them out of a cardboard paper towel tube cut into 2" lengths. I taped a piece of pink paper over the front and side of each one and then drew nostrils. MacGyver (hubbie) poked holes in them and strung stretchy cord around to hold them on. Little Sausage was not very keen on wearing his pig nose, as you can tell from his evil eye in the photo. He kept going cross-eyed to look down at it! Our oldest did vote that next year we all go as the cast of Star Wars. I guess story books aren't going to be cool enough anymore, or maybe he was still upset about the pink shirt part of his costume.
at 8:08 PM